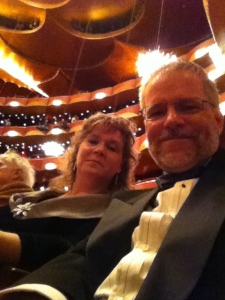 I’ve been dreaming about going to the Metropolitan Opera since I was in college. I’ve listened to countless Saturday radio broadcasts, listened to premieres on Sirius/XM radio, and, more recently, been a fan of the Live HD Broadcasts. All of these are great, but of course, nothing like being in the audience of an actual performance.

We finally planned a trip to NY City to take advantage of an airline voucher that was about to expire and we got one of our round-trip tickets to Philadelphia (the closest non-stop on US Air from Kansas City) free. We took the train, stopped for the night in Trenton to see a niece and her husband, then arrived in NY for a whirlwind 36 hours, the pinnacle being a night at the Met Opera to see “Don Giovanni”. The famed and world-renowned Met Opera.

Maybe it was the decades-long anticipation. Maybe it was the inability to tie my own bow tie. Maybe it was Karen being frustrated that she didn’t get her hair done. Maybe it was that we expected too much. Whatever the reason, we didn’t have an out-of-this-world, rave-about-it-til-we-die experience. Don’t get me wrong: we really enjoyed it. I splurged on really good seats (the most I’ve ever paid for two tickets to anything). We had a fantastic dinner. Waiting in the lobby before they opened the doors was great fun. The orchestra was sublime. So what was the problem?

It wasn’t perfect. There were wardrobe malfunctions (a wig fell off). A stagehand was visible as she walked backstage. A few light cues were missed. The lead was uninspiring. The set was (gasp) actually boring. The guy sitting next to me (luckily just in the first act) was fidgeting constantly and making his seat creak. The woman in front of me kept leaning her head on the guy next to her and seeming to nap. The other woman in front of me had a coughing fit. Come on! Really?!

This was supposed to be the quintessential opera/theatre/orchestra experience. Instead, I left feeling slighted. Like I missed something. Maybe if I had bought more expensive seats? Maybe if we had gone on the backstage tour earlier that day? Maybe if I’d had more wine? Maybe if we had seen a different opera? Maybe if we had known even one other person there that night? Maybe? Who knows?

As we walked back to the hotel and talked about our experience I thought: here I am, in the Big Apple for the first time ever and had experienced the Metropolitan Opera, and I was feeling less than euphoric. Bummer. But I guess that it’s all relative. Over time I expect that the memory of my experience will get better. Parts of it were indeed superb. For now, I’ll have to be content with feeling gratitude for getting the chance to sit in the velvety seats in the gorgeous house of the best opera company in the world. It’s certainly something I’ll never forget.