Breakfast: It’s become the running joke of the trip: planning to eat, eating, and talking about what we ate is why we’re here. I’m used to eating just one thing for breakfast. A banana. A yogurt. A bowl of oatmeal. I wasn’t prepared for the incredible breakfast buffet at the Resort. Lot’s of Swedish-type dishes (Swedish pancakes, latkas, lingonberries, bread) share space with many other types of food (cinnamon rolls, scrambled eggs, bacon, and sausage. Sorry, no pictures.

9:00 a.m. Peninsula State Park
With local guide Paul Regnier, we drive to one of 5 state parks on the Door Peninsula it’s on the Green Bay side and i’s great. We first head to an overlook that gives us a stunning view of the Strawberry Islands and, in the distance, the shore of the U.P. of Michigan. You’re supposed to be able to see Menomonee, but I can’t make it out. Paul turns out to be great. He’s quite funny, relaxed, and informative. But in a normal way. I’m enjoying getting to know him.

Looking back at the Fresnel in the tower.

10:30 a.m. Eagle Bluff Lighthouse
Paul then took the whole group to tour an historic lighthouse. I was surprised that it was so short. We were told by the lighthouse curator that because the lighthouse sits about 75 feet above the surface of the water (on the western edge of the Niagran Escarpment) it wasn’t necessary to be as high as other lighthouses in other areas of the country. The living quarters have been restored and were interesting. Especially when we heard that for 35 years, the lighthouse operator, his wife, and their SEVEN children. I guess they grew up and moved away, but it was a small, two-bedroom house. In a place where winters are very cold. For most of that time, the only way to get supplies (annually) was by water. Fascinating.

Noon: Al Johnson’s Swedish Restaurant, Sister’s Bay
I expect that almost everyone in Wisconsin knows about this place. In fact, I found a blog that said just that. But they may not know it by the name. They know if because there are goats on the roof. Yep. Goats. I was a little incredulous when I heard people talking about it, but when we drove by, sure enough, there was sod and goats up there. When we got to the restaurant, there seemed to be a mutiny brewing among the dozens of other customers waiting at the door: they’d been told that a tour bus group was coming and they’d have to wait until they got us through. I couldn’t help but mention that maybe they wouldn’t have had to wait so long had they made reservations 6 months ago. The meal was pretty good: meatballs, mashed potatoes and gravy, lingonberry sauce, and vanilla ice cream. I really enjoyed sitting with a few different people this time and hearing about their lives and families.

After the meal, we had less than 15 minutes to walk around. I took the chance to cross the street and walk through the marina and docks. For me, the next best thing to riding in a boat is looking at boats. There were small sailboats, fast speed boats, cabin cruisers, and a yacht or two. A highlight for me. (Note: if you want to see pictures, I’ll show you when I get back.)

1:30 p.m. Orchard Market
I thought we were headed back to Rowley’s Bay, but we stopped at the Seacrist Orchard Farmer’s Market. Everyone headed inside and immediately started buy food. Really. I poked my head inside, but to the opportunity to take a walk among the rows of cherry and apple trees. A storm system was making it’s way across the Peninsula by now, so a light rain started falling as soon as I got out of sight of the bus. Still, it was pretty cool to see so many cherries.

Odd coincidence: the car parked next to the bus had Johnson County, KS license plates and a KSU/KU house divided plate on the front. By the time I got back from my stroll, everyone was on the bus and the car was still there. As I walked up, a woman went to the car and I took the chance to tell her a whole busload of people from Manhattan was right here. We laughed a bit and she shared that one son went to K-State and the other to KU.

3:00 p.m. Hike
After spending so much time eating, I decided that I needed to actually get out and sweat a bit. Becky joined me and we had an enjoyable hike on cross-country trails. Fun, that is, until we hit the woods and the mosquitos descended. That wasn’t TOO bad. But then the trail abruptly disappeared and we had to backtrack. Then it got muddy (big sigh). After three more dead ends, we made it back to the Lodge after about an hour of walking. Despite the travails, I had a great time laughing and talking with Becky. She’s a great sport. No pictures here either.

5:45 p.m. Harbor Boat Trip and Dinner
Remember all the boats I got to look at earlier? Well this was even better. We drove to Sturgeon Bay and boarded the Harbor Lady for a two (not three) – hour tour. Most people headed to tables on the lower deck and, yep, got started on the buffet. A few of us went outside on the top deck and sat to watch other boats, a 700 foot ship, and lots of wooded shoreline go by. It was an awesome evening. The food was good, especially the roast beef. They also served fresh-baked sugar cookies like Midwest Airlines used to do with chocolate chip cookies. We were a little disappointed that the sun disappeared behind a large storm and it looked like we wouldn’t get to see sunset. But check out the photo. As we turned around to head back, the orange started creeping up and kept spreading. This memory will be a highlight for me.

Martha Ann on the deck. 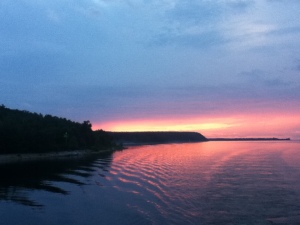 After the boat tour, we drove back to Rowley’s Bay in the rain and back to our rooms.

Tomorrow: Chapel tour, limestone caves, dairy farm (what’s that smell?), shopping, and a performance of Oscar Wilde’s The Importance of Being Earnest. I also heard that we’d be eating food, although I can’t imagine I’ll be hungry any time soon. I’m just sayin’.