Day 3, 8:30 a.m. Racine
We left the hotel in Racine around 8:30 without much fanfare and drove to Manitowoc without stopping. It was fun to drive around Milwaukee and see the Brewer’s stadium, but it was a pretty uneventful trip.

10:45 a.m. Wisconsin Maritime Museum
I’ve been looking forward to getting inside the USS Cobia since I first saw the itinerary. It’s the nation’s most completely restored WWII submarine and it didn’t disappoint. Our guide was a little green, but thoroughly excited about showing us Das Boot. It was great fun to hop through hatches and imagine 80-plus men living for weeks at a time in such cramped, hot, and humid quarters. The pictures of the group inside the submarine are great. Really hard to imagine what it must have been like. Other cool things were historic wooden boats that were made in Wisconsin. Reminded me of the old wooden boat my dad once had on the lake I grew up on. It even smelled the same. 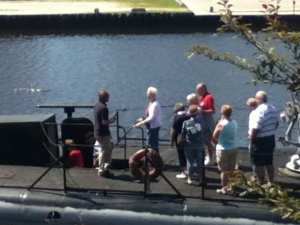 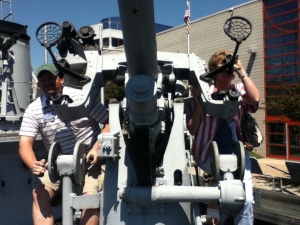 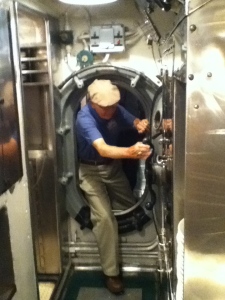 Bob making his way through a door. 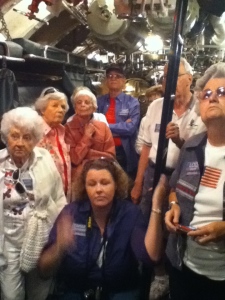 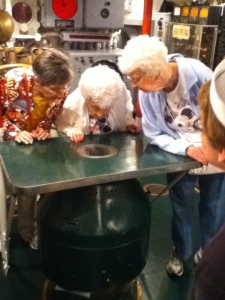 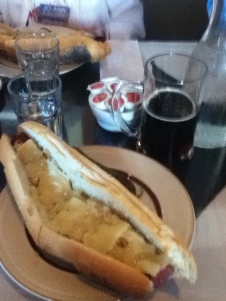 12:45 p.m. Harbor Side Restaurant
Not exactly beside the harbor, more like Near the

Harbor. But it was great fun. Most of us got the special “4th of July” hot dog topped with grilled onions, sauerkraut, and melted Swiss cheese. The photo really doesn’t do it justice: it was more than a foot long on a huge Kaiser-roll like bun. Plus they had a German beer on tap, a Doppelbock Optimator from Spaten-Franziskaner-Bräu in München. I couldn’t resist. I ate the whole dog and finished a half liter of beer. I don’t think I’ll feel like eating again until Thursday.

The most fun was hearing about the long line at the men’s restroom. Apparently one of the men in our group entered the men’s room, saw a women sitting inside. He said excuse me and closed the door. He waited in line for 10 minutes or so and finally went to a unisex restroom on the other side of the restaurant. After a few more minutes, another man in our group got up the nerve to peek inside to see if the woman had left. As he looked inside, he saw that “she” was actually a mannequin, with a full wig, low-cut blouse, lacy bra and a short skirt. And when you stand at the urinal, she’s looking right at you. Her companion, a male mannequin in a sailor’s uniform, stands in the women’s restroom. Priceless.

2:00 p.m. Drive to Door County
What’s a trip to Wisconsin without shopping at Wal-Mart? Apparently, a few people in our group wanted to find a Walmart to pick up some things they forgot. 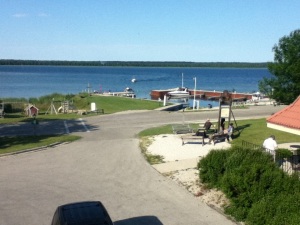 View from our room.

4:45 p.m. Arrive at Rowley’s Bay Resort, Door County
Every once in awhile on our drive into and through Door County I’d catch a glimpse of Lake Michigan or Green Bay, but never for very long. We drove through farmland, small towns, quaint roadside attractions, saw an arts and crafts fair, and small shops with lots of tourists. Rowley’s Bay is in northern Door County on the Lake Michigan side and seems a bit secluded. It’s beautiful and the view of the lake is great. We settled in a bit then it was time for the next activity. 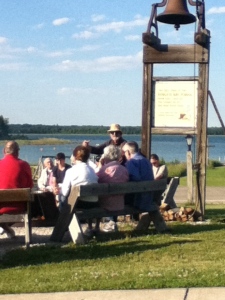 6:00 p.m. Fish Boil, Dinner, Campfire
The fish boil started with a wonderful re-enactment by a local historian of the person for whom Rowley’s Bay is named after. Bearded and grizzled with a booming voice, the actor was witty, sharp, and seemed to really enjoy himself. During his presentation, the kitchen staff added potatoes, onions, and fish to the boiling pot on the outdoor fire. It culminated in the adding of kerosene to the fire to produce the much anticipated (and heralded with bell-ringing) boil-over. The boil-over, we were told, is to remove all the oils extracted from the cooking process. It was quite a flare-up. But the boiling wasn’t that spectacular. One resident leaned over to me and whispered: “that fish oil is good for you!”

Since I was still full from the hot dog at lunch, I chose carefully from an extensive buffet with the cooked potatoes, onions, and fish as the centerpiece. There were all sorts of salads, soups, casseroles (or do they call them hot-dishes in Wisconsin like they do in Minnesota?), and breads. They even had a cardamom bread that is Swedish, I guess.

After dinner, I went out to the pier and read a bit until it was time for our campfire. We all gathered either on the patio or around the nearby campfire to enjoy the evening and wait for it to get dark enough to light sparklers. Everyone had great fun wearing glow-sticks and watching the fireworks above the treetops to the north of the resort. After that, people drifted away to card games, small groups to talk, or to their rooms. 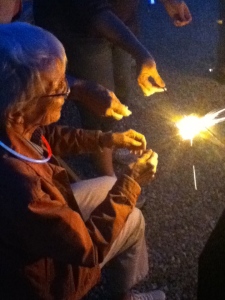 Ruth gets her sparkler lit.

Tomorrow: We get a bus tour of a state park that includes a lighthouse, a Swedish lunch, a free afternoon (zip line anyone?) and a sunset dinner cruise. Hey, no one said work has to be work!